About the College of Osteopathic Medicine 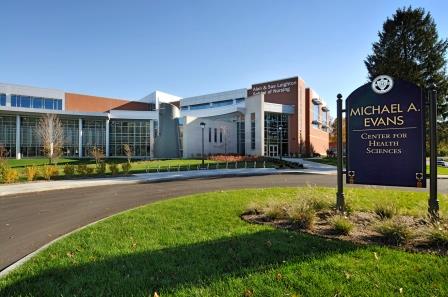 In January 2010, Marian University announced the creation of Indiana’s newest medical school. Opening in 2013, the Marian University College of Osteopathic Medicine (MU-COM) became Indiana’s second medical school, recognizing the power of the osteopathic medical philosophy—treating the patient mind, body, and spirit to find the root cause of illness.

The doctor of osteopathic medicine (DO) program emphasizes osteopathic training in all areas of medicine, particularly primary care, through lifelong learning and scholarly activity delivered by a dynamic academic community.

Students begin their careers in osteopathic medicine in an environment focused on success. Created with the Fundamental Osteopathic Medical Competencies 2011 and the Carnegie Report 2010 in mind, MU-COM utilizes a competency-based curriculum, with interprofessional hospital experiences, clinical integration in biomedical courses, and interdisciplinary training.

The Michael A. Evans Center for Health Sciences is home to MU-COM and the Alan and Sue Leighton School of Nursing—giving medical and nursing students opportunities for interprofessional education in a state-of-the-art facility. Located on the southeast corner of the Marian University campus, students have access to a vibrant campus, a great city, and countless professional and personal opportunities. Visit our Campus Life page for more information.

For more than 75 years, Marian University has been educating students in a faith-based, liberal arts environment. The rich tradition and vibrant campus gives all students access to arts, cultural, and sporting events throughout the year. Students have access to study areas, recreational facilities, research labs, a student center, and other areas throughout campus.

The environment within the Evans Center fosters a spirit of collaboration between MU-COM and the Leighton School of Nursing, so future nurses and physicians work together in a variety of situations.

Indianapolis, known as the Crossroads of America, is one of America's greatest cities. In 2020, LinkedIn ranked Indianapolis fifth in its "Top 15 Cities to Launch Your Career" list. MU-COM students benefit from experiences supported by multiple clinical partners throughout the state of Indiana, including in urban, suburban, and rural communities. 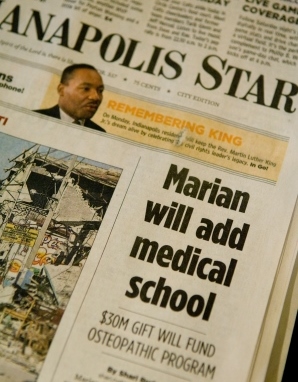 With only one medical school in the State of Indiana to educate physicians for more than 110 years, the state is experiencing a physician shortage, unable to completely meet the communities' healthcare needs. Since the late 1990s, the Indiana Osteopathic Association (IOA) searched for a partner with whom to build an osteopathic medical school, and in late 2009, they found one.

In January 2010, the decision to move forward with developing Indiana’s first new medical school since 1903 was endorsed by the Marian University Board of Trustees and the IOA. The IOA selected Marian University’s proposal, which included a lead gift by founder and CEO of AIT Laboratories, Michael A. Evans, Ph.D., In recognition of his gift, the university’s new building was named Michael A. Evans Center for Health Sciences. On January 15, 2010, the university and the IOA announced plans to start Indiana's first osteopathic medical school. 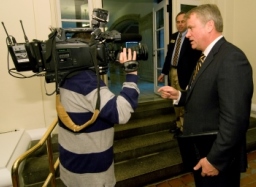 Since the announcement in 2010, the university and the college of osteopathic medicine have worked diligently to bring together many partners to help make the venture possible. These partners include architects, hospitals, pharmaceutical companies, law firms, and other businesses—all investing in the project monetarily and/or by providing our students with a wider variety of learning opportunities at their organizations. MU-COM enrolled the first class of osteopathic medical students in the state’s history in August 2013.