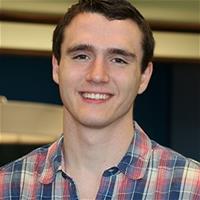 "My favorite thing about Marian is the close relationships I've built with faculty who know my name and are legitimately dedicated to helping me succeed. They have had a huge impact on me as a student and a person."

Thanks to a lifelong interest in sports, physical fitness, and human health and wellness, majoring in exercise science at Marian University has been a natural fit for senior Scott Prewitt.

And thanks to his strong academic performance and perseverance, the former student-athlete will graduate in May 2018. What are his post-graduation plans?

He'll begin a three-year, full-time Doctor of Physical Therapy (DPT) program at the University of Indianapolis. Admission to the program, which is consistently ranked among the nation's best, is highly competitive. The average GPA of those offered admission is 3.7 and requires three recommendations, including one from a licensed physical therapist.

"The process of applying and being accepted into the DPT program was stressful," he notes. "The exercise science faculty and advisors at Marian were key to my success, especially Monica Teegardin. She's had a huge impact on me and I know she's had a similar impact on other students. I consider her a friend and a mentor. In fact, Monica was the very first person I told when I received the news that I'd been accepted."

Scott has also been recognized for his accomplishments outside of the classroom. A former member of both the men's track and field and cross-country teams at Marian, Scott was part of both championship teams during the 2016-17 academic year.

As he enters the final leg of his undergraduate career, Scott is completing a 25-hour per week internship at Acceleration Indiana. Working out of the company's west Indianapolis location, he's helping to train athletes of all ages to be the best that they can be.

Scott uses the company's proprietary equipment and training protocols to help athletes achieve improved acceleration, speed, balance, agility, stamina, and biomechanics. The company specializes in plyometrics training and sport-specific power cord training. It also has a rehabilitation program that bridges the gap between post-injury workouts and try-outs or the start of practice.

He isn't sure what his ultimate career path will look like, but says he's interested in working in the area of prosthetic development and rehabilitation. We wish Scott much success and look forward to following him on his graduate school journey.

Bachelor of Science in Exercise Science