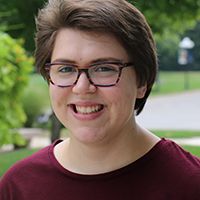 "Choose the school that's right for you—wherever you are in your life right now. Look for a college where you'll get a great education AND that offers programs to meet your spiritual, emotional, physical, and other needs."

As a child, Rachel McKay's passion for nature and the outdoors led her to become a certified Junior Ranger in ten national parks across the U.S.

Now that she's a senior in college, Rachel hasn't lost that passion. In fact, she puts her knowledge and skills to good use as an education assistant in Marian University's Nina Mason Pulliam EcoLab.

Her efforts were recognized with a 2018 Excellence in Summer Service Education Award, a $1,000 award provided courtesy of the Summer Youth Program Fund.

Working in the EcoLab has been fun, says Rachel, whose grandmother and mother attended Marian in the 1950s and 1980s, respectively. Her work has included everything from removing invasive plant species to helping with K-12 educational programming for summer STEM camp students.
"I've dug out and removed dams that beavers have built in the pond, tagged butterflies, helped keep bees, and planted native plants. I've enjoyed teaching others about the nature that I love—and working with the EcoLab staff is phenomenal," McKay explains.
But whether she's hiking in Grand Teton National Park or teaching children about the natural habitat in central Indiana, Rachel McKay is a woman on the move.

In fact, she was one of 15 students from Marian's Klipsch Educators College who traveled to South Korea this summer to explore that nation's educational system and culture.

"Traveling to South Korea was a very enlightening experience. I met and talked with faculty and administrators in South Korean schools. I sat in their classrooms and observed their teaching and instructional methods. I learned that South Korea has one of the world's best educational systems. But, on the flip side, they have a very high rate of teen suicide. One of the most important insights I gained was about balance between educational achievement and childhood development. In the United States, we emphasize the importance of education, but children have more time to be creative, have fun, and be children," reports McKay.

She says study abroad opportunities teach college students there is more to the world than their own social systems. "Studying abroad teaches acceptance and understanding of other cultures as well as the opportunity to view one’s own culture with a new perspective."

McKay's current career goal is to teach kindergarten somewhere in Indianapolis, although she isn't ruling out teaching internationally in the future. It's likely she'll also pursue a master's degree in education after a few years.
"I really want to use my Spanish language skills to help students succeed in the classroom and their communities," said the Indianapolis native and Roncalli High School graduate. "I love to work with children and it is an honor to have an opportunity to help shape their lives."
Transferring to Marian University after spending her freshman and sophomore years at Saint Louis University, McKay fit right in as a member of the campus community.
"Marian was on my short list of colleges as a high school student, but I decided to choose an out-of-state school. When I realized I missed Indianapolis and being closer to family, Marian was the only college that I considered."
McKay is excited about starting her student teaching experience this spring, noting she has already completed several semesters of practicum courses and experiences.
"What I've learned so far is that each child is his or her own person with their own reasons for being. Each child has a different story and different needs. It's my job as an educator to learn about their needs and to be a teacher who can meet those needs."

McKay's advice for choosing a college? "I think it's important to go with your gut. Choose the school that's right for you, wherever you are right now. Look for a campus where you'll get a great education AND offers programs that meet your spiritual, emotional, physical, and other needs. If your needs or goals change, then change schools."

Since transferring to Marian, McKay says she has found a community that's always here for her. "Between my friends, classmates, and professors, I've learned when to ask for help, which has made me more academically successful and less stressed than I was at my previous school."

Bachelor of Arts in Elementary Education