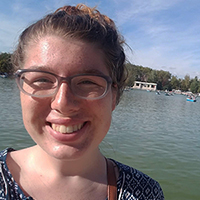 "Marian's Franciscan values are things I care deeply about. And the 21st Century Scholars Program has provided me with incredible support. My experience has been extremely rewarding."

Kayla Bledsoe is making the most of her Marian University student experience.

With two majors and three minors, her academic interests are firmly grounded in the College of Arts and Sciences, which recognized Kayla with an award for outstanding student leadership last year.

Kayla lives in the Dorothy Day House (DDH). This student living-learning community is modeled on the principles embraced by Day, who was an influential journalist and activist recognized for advancing women’s suffrage, relieving the suffering of those impacted by the Great Depression, and the Catholic Worker Movement.

DDH housing is reserved for students interested in peace, justice, and social causes. As a result, Kayla has built relationships with like-minded peers who are passionate about eliminating social stereotypes and reducing oppression based on gender, sexual orientation, and skin color.

During her sophomore year, Kayla traveled to Brazil with the Department of History and Social Science for independent research. She compared the history, policies, and realities of life for Brazilian and American women with non-heteronormative identities.

Now a junior, the Warren Central High School graduate has already completed three internships. Her first was with State Representative Karlee Macer, who led development of an initiative focused on improving quality of life and creating jobs on the west side of Indianapolis.

At Faith in Indiana, a nonprofit group which partners with church and community stakeholders, Kayla supported the group’s work to address social justice issues like healthcare, immigration, racial equality, and economic parity.

A summer internship with Congressman Andre Carson focused on constituent services. Kayla answered phones and listened to citizen concerns. She helped coordinate a job fair hosted in partnership with Ivy Tech Community College. She attended a naturalization ceremony where more than 100 people became citizens, applied for passports, and registered to vote. She also researched and compiled lists of science, technology, engineering, and math (STEM) middle and high school teachers in Carson’s district, which includes most of Marion County and the City of Indianapolis.

In August, she began preparing for a semester studying abroad in Spain. She is taking 18 credits of classes at the Universidad Pontificia Comillas (or Comillas Pontifical University), and living with a host family in Madrid. Founded in 1890, the highly regarded college provides undergraduate and graduate programs for about 10,000 students. It includes four unique research institutes and houses the Catholic Institute of Arts and Industry.

“Studying abroad is teaching me how people from other countries perceive Americans and the United States. In that sense, learning about Spanish culture is helping me to better understand my own,” says Kayla, whose host family includes eight-year-old twin boys.

The junior class president will dive back into campus life after the first of the year, once again residing in DDH and participating in activities like helping to plan Kids N’ Sibs Weekend, when brothers and sisters of current Marian students are invited to spend the weekend on campus.

Interested in working with Spanish-speaking youth and immigrants, a career in the nonprofit world is likely. “I want to work for the good of others. As a child, I was fortunate to be involved in youth programs sponsored by nonprofit organizations like Jameson Camp. My goal is to provide hope, help, personal development, leadership training for youth like it was provided to me."

Kayla is glad she chose Marian University. “Marian’s Franciscan values are things I care deeply about. And the 21st Century Scholars Program has provided me with incredible support. I have a network of peers, faculty, and staff who I can count on for conversation, advice if I have a bad day, and information about student resources. It has been extremely rewarding.”

Bachelor of Arts in Sociology

Bachelor of Arts in Spanish