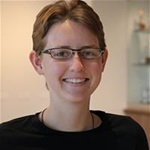 "I would definitely encourage any incoming freshman to consider double-majoring...because it has really helped me grow as a person."

Pursuing a double major was the perfect solution for Marian University junior Kate Timmermann when she couldn’t choose between two fields of study.

“I’m interested in both of my fields. I love learning how humans function, both physically and mentally. It sounds practical when I tell people I’m a biology major, plus I’m fascinated by how the body works. And English literature has a lot of human relevance that really interests me,” Timmermann says.

She decided to pursue both subjects and is glad she made the decision. “As I’m finishing my third year, it still amazes me how often I find the two seemingly unrelated fields intersect and enrich each other.”

As a freshman, Timmermann originally planned to prepare for a science-related career, primarily thinking research and development roles in a medical laboratory. Since then, she says she’s learned a lot about herself and, while she hasn’t totally excluded that career path as an option, she’s going to take a “gap year” after graduation to contemplate her next steps.

Many students take a gap year between high school and college. Although there no official statistics about how many students choose this option, the Gap Year Association reported that 40,000 American students participated in gap year programs in 2013, an increase of 20 percent since 2006.

And while it is more common for U.S. students to take a gap year between high school and college, up to ten percent of that number take a gap year after completing their undergraduate degrees and before they go to graduate school or enter the workforce.

The statistic does not include students from European nations, where gap years are more common and have been popular for decades.

“I want to spend a year serving the marginalized and decide if graduate school is a good choice for me,” Timmerman explains. “I’m open to the workings of the Holy Spirit in my future.” She plans to apply for a position with FrancisCorps, which has a year-long, faith-based program in Syracuse, NY. The group has nearly a dozen placement sites throughout the city where participants like Timmermann serve the poor and marginalized, including youth, disabled adults, the terminally ill, and refugees.

Her advice for freshmen who are undecided about what major to choose in college?

“I would definitely encourage any incoming freshman to consider double majoring, especially if their interests don't necessarily align with what their family members might think is a worthwhile field of study, because it has really helped me grow as a person.”