Associate Professor of Microbiology and Immunology 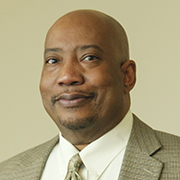 Dr. Wilbert Derbigny joined Marian University College of Osteopathic Medicine as an associate professor in the Department of Microbiology and Immunology in July 2020. After receiving his Bachelor of Science degree in 1990 from Xavier University of Louisiana, he served a four-year stint in the biotech sector before returning to academia in 1994 to pursue an advanced degree at Louisiana State University Health Sciences Center (LSUHSC) in Shreveport. In 2001, Dr. Derbigny completed his Ph.D. in Molecular Virology at LSUHSC, and his dissertation research focused on defining the role of the ICP22 homolog in the gene regulation of equine herpesvirus-1 replication.

Immediately after completing the Ph.D., Dr. Derbigny joined Eli Lilly and Company in Indianapolis, Indiana as a postdoctoral fellow in the pharmaceutical industry. During that time at Eli Lilly, he was part of a lab in drug discovery research where much of the research in the division was proprietary investigations into therapeutics to treat patients infected with hepatitis C virus (HCV). As a postdoctoral fellow in drug discovery, Dr. Derbigny was assigned a project investigating ways to exploit the various mechanisms utilized by the viral proteins NS5A and NS5B to initiate HCV viral replication. The unfortunate economic downturn post 9/11 caused premature termination of the postdoctoral fellowship at Eli Lilly, at which point Dr. Derbigny returned to academia in 2003 where he joined the Infectious Disease division as a postdoctoral fellow at Indiana University School of Medicine (IUSM).

As a postdoctoral fellow at IUSM, Dr. Derbigny switched gears from virology to bacteriology and joined a laboratory whose primary focus was the immunopathogenesis of genital tract Chlamydia infections. Dr. Derbigny experienced a major shift in research direction with the switch from investigating viral gene regulation and its impact of viral replication to studying host-pathogen interactions and their impact on clinical disease. The two major projects during this second postdoctoral appointment included: (1) Delineating Toll-like receptor (TLR) dependent responses to Chlamydia infection of murine oviduct epithelium and (2) Investigating mechanisms of Chlamydia-induced T-cell anergy. The publications from this second postdoctoral appointment served as preliminary data for a successfully funded NIH K22 application, whereby he proposed to test the hypothesis that TLR3 plays a significant role in the chlamydial induced synthesis of interferon beta (IFN-β) in genital tract epithelial cells.

The NIH K22 career development award was a critical part of Dr. Derbigny’s successful transition into the Microbiology and Immunology department at IUSM as a tenure-track assistant professor position in the fall of 2007. Dr. Derbigny established his lab with the primary goal of demonstrating a role for TLR3 in the immune response to Chlamydia in murine oviduct tissue. He then spent the subsequent 13 years establishing himself as a leader in the field of researchers investigating the chlamydial induced innate immune response in the female upper genital tract. During his tenure at IUSM, Dr. Derbigny has published numerous abstracts, poster presentations, and manuscripts on the novel interactions between Chlamydia and TLR3, and he has recently expanded the scope of his studies to address the impact of TLR3 function in outcomes of human Chlamydia-human papillomavirus (HPV) co-infection. Towards this goal, Dr. Derbigny will test the hypothesis that pathogenesis of genital tract Chlamydia infection can enhance the infectivity of HPV and thereby can serve as a co-factor in HPV-induced cervical cancer.

Dr. Derbigny’s transition to Marian University will include transferring over a robust research program that was developed during his tenure at IUSM—one that has been funded from numerous agencies, including funding from an NIH R01 grant that is in the process of competitive renewal. While at Marian, Dr. Derbigny will continue teaching future medical professionals the basic principles of medical microbiology and help them to gain a better understanding of how host-pathogen interactions contribute to clinical disease. With a highly developed research understanding and extensive experience in teaching, training, and mentoring students in a research setting, Dr. Derbigny will continue his mission to contribute to student education by helping the future medical professionals attending Marian University learn how to develop critical thinking skills and conduct high-quality, hypothesis-driven research.