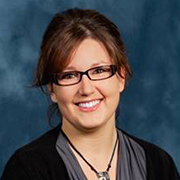 Dr. Sophie LaSalle received a Bachelor of Science in Biochemistry from the Université de Sherbrooke (Sherbrooke, Quebec, Canada) in 2000 and a Ph.D. in Pharmacology and Therapeutics from McGill University (Montreal, Quebec, Canada) in 2007. She then completed postdoctoral training in the Reproductive Biology Group at The Jackson Laboratory in Bar Harbor, Maine, in 2011. She joined the faculty of Midwestern University (MWU) as an Assistant Professor in the Department of Biochemistry in July 2011. She was promoted to the rank of Associate Professor with tenure five years later. In 2017, she transitioned to an administrative role in the Office of the Dean of the Chicago College of Osteopathic Medicine (CCOM). She first served as the Assistant Dean for Academic Affairs and was promoted to Associate Dean for Academic Affairs a year later.

Besides teaching biochemistry in graduate courses for medical, dental, pharmacy, and other allied health students, Dr. LaSalle has been dedicated to training and preparing students for careers involving research. Her long-standing interest in reproductive biology allowed her to develop a program focused on deciphering the function of a gene involved in meiosis and fertility using the mouse as a model. As the Associate Dean for Academic Affairs, she has contributed to academic tracking and counseling, assessment and outcomes, accreditation, curriculum development, faculty development, implementation and revision of academic policies, student research, and residency advising.

Dr. LaSalle fostered her leadership skills through her involvement on committees at MWU and professional societies. At MWU, she has chaired CCOM committees, has contributed to the expansion of the Midwestern University Research Day, and was actively involved in the Research Strategic Planning Group, which led to establishing a Core Facility on campus. Nationally, she has been engaged with the American Society of Andrology (ASA) and the Society for the Study of Reproduction (SSR) for more than a decade.

In addition to being an active member of numerous committees, she previously organized the ASA Basic Science Workshop, chaired the ASA Trainee Affairs Committee, served on the ASA Executive Council, and was the SSR liaison on FASEB’s Publication and Communication Committee. Dr. LaSalle also recently completed the Administrator Leadership Development Program offered by the American Association of Colleges of Osteopathic Medicine (AACOM).