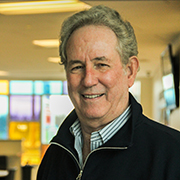 Dr. Williams was appointed to the adjunct faculty of Marian University – College of Osteopathic Medicine as an Assistant Clinical Professor in August of 2013.  A practicing Diagnostic Radiologist at the time, he assisted in teaching classes in medical imaging to first and second year MU-COM students and continues in that capacity.  A former member of the Marian University Board of Trustees, he has served on several committees and currently is Chair of the Admissions Committee at MU-COM. He provides the instruction in the medical imaging portion of the Clinical Colloquium given to third year students each July/August.  He is also the current chair of the Committee on Professionalism and Medical Ethics and became a part-time faculty member on January 1, 2019 as an Assistant Professor of Internal Medicine/Radiology.

He received his Doctor of Osteopathic Medicine degree from Kansas City University of Medicine and Biosciences in 1976.  Following a year of a clinical rotating internship at Brentwood Hospital (now an affiliate of Cleveland Clinic) in Cleveland, Ohio he completed a residency in Diagnostic Radiology at San Diego Naval Regional Medical Center (NRMC) – serving as Chief Resident his final year and earned Board Certification from the American Board of Radiology in 1981. During his seven years active duty in the United States Navy Medical Corps he gained considerable teaching experience with radiology residents and developed the Chest X-ray Interpretation classes for nurse practitioners and physician assistants. As an attending staff radiologist from 1981-1984 at NRMC he also served as a member of the executive committee in Radiology and performed duties as head of the quality assurance program.

Following his Naval experience, he practiced Clinical Diagnostic Radiology at Westview Hospital in Indianapolis, In. from 1984-2014, retiring from clinical radiology to become CEO of Community Westview Hospital and West Regional President of Community Health Network until retirement in April of 2017.  He served as a member of the Board of Directors at Westview Hospital from 1993 to 2014 and the Chief of Staff from 2006 to 2014.  His experience encompasses 40 years of resident and medical student teaching in medical imaging which includes receiving honors in 2011 and 2012 as the Most Outstanding Postgraduate Teacher at Westview Hospital.