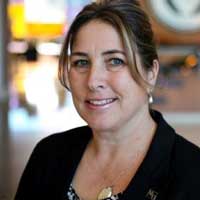 Wendy Westphal, Ph.D. is the director of study abroad and is also an associate professor of German at Marian University. She received her Ph.D., in Modern German Literature and Culture in the Department of Germanic Studies at Indiana University in 2010. Dr. Westphal’s research investigates the collective memory of East Germany in literature, film, and museums after the fall of the wall.

Dr. Westphal has been the director of study abroad since 2012 and is a great advocate of study abroad. She studied and worked in Germany for a total of eight years and has traveled extensively. In addition to traveling throughout the United States, she has traveled in over forty countries. Beyond Germany (her favorite European country), her most exciting trips have been to Iceland, Russia, and Poland.

Dr. Westphal’s experiences in Europe began with a junior year abroad in Konstanz. This transformative year inspired her to return to Konstanz after finishing her B.A. to get a Magister in German and English literature at the Universität Konstanz. After finishing her Ph.D., coursework at Indiana University in Bloomington, she returned to Germany for three years where she studied and taught English as a Fulbright Foreign Language teaching assistant for a year at the Albert-Schweitzer-Gymnasium in Erfurt. In addition, she studied at the Universität Bayreuth, and conducted dissertation research at the Universität Erfurt with the support of a Carl Schurz Research Fellowship that was sponsored by the European Recovery Program.

Dr. Westphal loves to travel and learn about other cultures and she hopes to inspire students to do the same.