Dec 10, 2018, 13:25 PM by User Not Found
Why do we bring a tree inside our homes? Why do we hang stockings? Why are poinsettias the flowers of choice? When did kissing under the mistletoe become a thing? 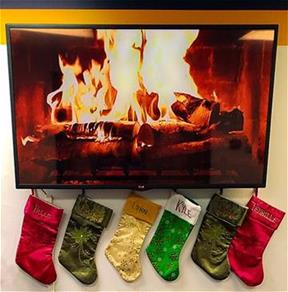 I did it. I put my Christmas tree up last weekend. (whew!) The older I get, the harder it is to be motivated enough to decorate. I have been collecting ornaments since I was a child, so I have quite a few. It’s so much work, and then it feels like even more when the time comes to take it down. How can that be? But every year I do it—it’s a tradition. Christmas just doesn’t seem like Christmas without it. As I worked, I wondered about the start of various holiday customs, so I did some Googling, and below is what I found.

Most families have their own unique holiday customs​—a special meal for Christmas dinner, gift exchanges, going to midnight church services, singing Christmas carols, etc. Luckily, many of my co-workers bake and share cookies as part of their holiday tradition. This year, we even decided to spread some holiday cheer and decorate our office in Marian Hall with stockings and a roaring fire. As some of us are single, we’re hoping that St. Nicholas fills our stockings with gold coins this year.