Don't wait for graduation to capitalize on career opportunities!

Dec 18, 2017, 00:02 AM by User Not Found
MAP student Brian Slaughter's is a great example of why students shouldn't wait to take advantage of unexpected career opportunities. 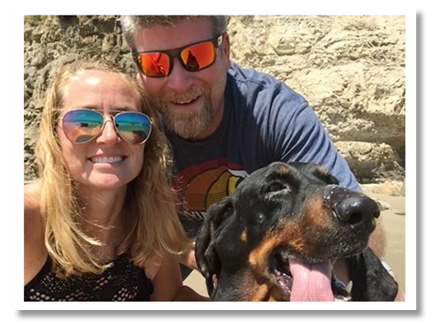 Last May, Brian Slaughter and wife Cathy pulled up their Indiana stakes and headed for Los Angeles! Does he aspire to be a movie star? Hardly! A competitive surfer? Nope! A vineyard owner? Not even close. Brian accepted a job offer with one of the world’s fastest growing companies. That’s right. He is now an Amazonian. After ten years in the U.S. Navy and nearly two decades working for publisher, Hachette Book Group, he had an opportunity to join Amazon.

I still recall the day when Brian stopped by my office with his big news. Although he was excited, there was a hint of sadness in his voice. He had worked hard over the last several years to complete his degree at Marian and was disappointed he wouldn’t be able to finish it. I congratulated him on his great news, then calculated that he needed an additional nine classes to finish his Bachelor of Business Administration. I can still see the smile on Brian’s face as we discovered all nine classes could be finished online. Brian wanted a degree from Marian, and he could still earn one.

Brian credits the Navy, logistics experience, and his Marian education for his current position as an Area Manager, supervising 180 employees, shipping 500,000 packages per day from Amazon’s Pasadena distribution facility. He applies Amazon’s delivery focus of “whatever it takes to get a package to a customer” as a successful personal philosophy as well. Whatever the task, whatever the goal, do whatever it takes.

A few weeks ago, while in Indiana for a visit, Brian again stopped by my office – now, with only two classes left to complete! He enthusiastically declared his intent to don cap and gown at Marian University’s Commencement next May.

I asked if he is becoming a Californian at heart. He answered, “Not a chance.” He went on to say, “The weather is great... oceans, mountains, and desert are within a few miles... the culture is diverse.” But he admittedly was a bit surprised to learn that “Traffic is as horrific as we Midwesterner’s have been led to believe.” Californians speak of how much time a trip, a drive will take, not how many miles it is.

Is working at Amazon in Los Angeles the offer of a lifetime? Brian says “No, but it is a step in the right direction... a step that right now [he] wouldn’t trade for anything.” In fact, when initially offered a position with Amazon, Brian could have chosen from among several cities including Chicago, Columbus, St. Louis, and Kansas City. But he knew he wanted to go west, so he chose Los Angeles.

I don’t expect Brian’s story to end in California. Opportunities with Amazon are worldwide and growing, and he dreams of someday starting his own business. Grinning he said, “Maybe even Back Home Again in Indiana.”

But for now, what an adventure! Brian and his wife are enjoying their time in Los Angeles following another Amazon (and personal) philosophy: Work Hard! Have Fun! Make History!