I have a confession. I’m a born and bred Hoosier, and I’ve never been to the Indianapolis Motor Speedway. I know. I know. It’s like someone from New York City never going to Central Park or someone from San Francisco never seeing the Golden Gate Bridge. Oddly enough, I’ve gone on a carriage ride in that famous park and I’ve walked on that magnificent bridge. Yet, I live in Indianapolis and I’ve never gone to that iconic race.

I can’t explain it. I grew up in Fort Wayne. Every Memorial Day weekend, my parents religiously listened to the race on the radio. I’ve lived in Indianapolis for the past 22 years. I work just a few miles from the Speedway. In fact, I work at Marian University which even makes it worse that I’ve never been to a race. Why, you ask? Because Marian University’s campus is steeped in racing history.

Our amazing campus is located on the grounds where three of the four entrepreneurs lived who built the Indianapolis Motor Speedway! That’s right. James A. Allison, Frank H. Wheeler, and Carl G. Fisher all built amazing estates along Cold Spring Road, which was dubbed “Millionaires Row.” 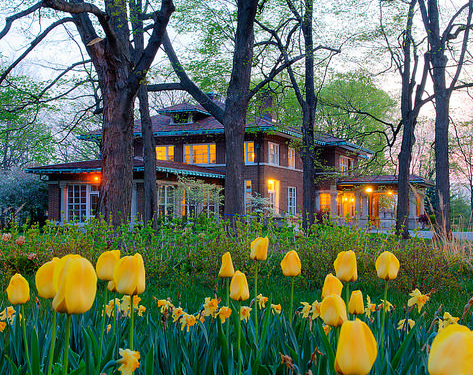 James Allison was a true entrepreneur. He was the inventor of the Allison Perfection Fountain Pen. He founded Allison Experimental Company which became Allison Engine Company and Allison Transmission. Along with Carl Fisher, Allison co-founded a company which produced automobile headlights. He and Fisher sold that company to Union Carbide in 1913 for a whopping $9M! Allison also had a hand in creating the town of Speedway. Construction of his estate, Riverdale, began in 1910. The mansion was luxurious, and included an elevator, a central vacuum system, and an indoor swimming pool. Today, the mansion is available for events, and it houses the office of Daniel J. Elsener, Marian University’s President.

An Iowa native, Frank Wheeler earned his wealth by producing carburetors for some 15 automobile manufacturers. He built his estate, Hawkeye, along Cold Spring Road to be close to his friends and business partners.The estate included an authentic imported Japanese Tea House, servant’s house, a covered dog walk, and featured a unique green terra cotta tile roof. The mansion now houses the Marian University Admissions Office. It is now commonly referred to as Stokely Mansion for its later owner, William Stokely, president of Stokely-VanCamp Packing Company.

Carl Fisher was born in Greensburg, Indiana in 1874. Fisher had his hands in several ventures. Besides the headlight company, Prest-O-Lite, Fisher operated the first automobile dealership in the United States. He also conceived and developed the first road across the entire US, the Lincoln Highway. Fisher was also involved in real estate promotion in Florida and helped develop Miami Beach. Fisher’s estate, Blossom Heath, included 12 bedrooms, an indoor tennis court, a polo course, and a stable. Unfortunately, the mansion had to be razed after a fire in 2014. 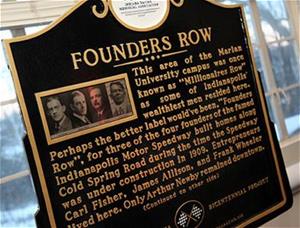 On December 14, 2016, Marian University and the Indiana Racing Memorial Association came together to celebrate the lives of these three visionaries. There is now a historical marker by Allison Mansion that commemorates the IMS founders. That marker seems to call out to me, “Amy, You live in Indianapolis and you work at Marian University. Go to the track this May.”