You're in medical school, but you're not alone

Sep 19, 2018, 15:53 PM by User Not Found
Second-year osteopathic medical student, Kathleen Hoban, shares the unexpected challenges that almost kept her from following her dream of becoming a doctor. 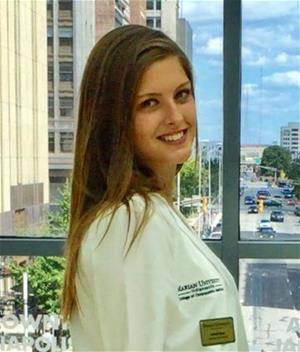 I chugged two cups of coffee before putting on the purple floral dress that I picked out especially for my first day of medical school. I slept a mere two distressed hours the night before and had puffy, tired eyes to take care of. I hoped the caffeine coursing through me would hide the fact that I was going through what would be the hardest days of my life. I wasn’t sure what would be the most memorable part of my first day of medical school, but I sure didn’t think it would be the car accident I almost had as I inconsolably cried while driving back from orientation to the apartment my now ex-boyfriend and I shared.

At that moment, I didn’t know how I would get past the most challenging emotions I had ever experienced. I was confronting death/grievance up close and personal for the first time in my life. My aunt was 50 years old when cancer stole her from us. My cousin’s mother didn’t see him graduate from college. My dad tried his hardest to protect his little sister, but cancer can't be reasoned with. I would never again have the chance to tell her how much she meant to me; these were raw, nauseating emotions. Nevertheless, I choked back the tears, showed up to orientation, plastered a smile on my face, and did the whole medical school thing.

I had thought I knew what my support system would look like while I was in medical school and that my family would be just a phone call away. Except now, their worlds were also surrounded by grief. I had assumed that my boyfriend and I would lean on each other; we’d switch off who cooked dinner and make sure to keep each other grounded during exam weeks. Except now, our worlds were no longer one. That anticipated support system had crumbled under me in a matter of days. How could I succeed without what I had so heavily relied on in the past?

By the second day of orientation, I had packed up and signed a new lease. I would spend the weekend of my White Coat Ceremony moving into a one bedroom apartment where I would live by myself for the first time in my life. I would learn a lot about myself in this solitude. I’d cry big, solemn tears for my losses. I’d wake up early to prepare for anatomy lab; but the early wake-up calls were more likely a way to distract myself from the insomnia, loneliness, and grief I felt but wouldn't admit to.

I started medical school by telling myself that I couldn't handle what I was going through. I wanted to give up before I had even begun. The challenge of managing my studies while healing overwhelmed and consumed me. But I trudged forward through the mess of emotions that my life had become. I learned to lean on family and friends. I learned that my classmates would become my most incredible support system. I learned that MUCOM faculty and staff genuinely care about their students and want to see us succeed. I learned that I am capable of tackling the most difficult emotions, while also addressing the most demanding academic material. I did it. And I’m better because of it.

My first year of medical school taught me a plethora of new information about medicine, but more importantly, it showed me that I have an exceptional strength that will allow me to tackle the tough stuff with grace and ingenuity, and so do you.

This journey is not easy. Life happens—death, loss, break-ups—but LIFE happens too! I made new friends, new memories, and enjoy a new found confidence in my ability to achieve. Although the path to becoming a physician is daunting, and there might be roadblocks along the way, I will succeed. I have what it takes to be a phenomenal physician despite what life throws at me.

If you're struggling with the difficult adjustment to medical school, don't hesitate to reach out. Reach out to your friends, family, classmates, faculty members. Schedule an appointment with the counseling center on campus (seriously, do it). Shoot me a text; I’ll meet you for coffee and remind you that you're here for a reason. You can do this. You are not alone.