Does Education Pay Off? 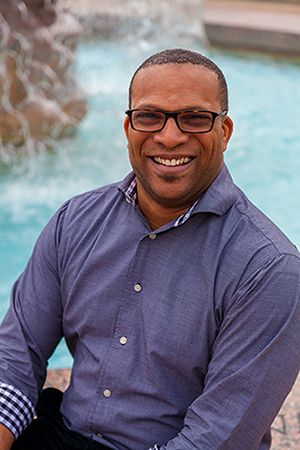 Eliot Forrest, Class of 2017,  admits to always thinking and dreaming big. Even as a teenager and young adult he believed he would achieve much and give great things back to the world. He just wasn’t sure how. But he did develop a life philosophy to guide him: “Don’t think you are. Know who you are, and become who you are.”

Over the last 22 years, Eliot spent 17 of them at Anthem, Inc., and the last five working for National Government Services, primarily as an “IT guy.” But Eliot dreamt of more. Dreams fed his pursuit of a formal education and that was one step in helping Eliot become who he truly is. As Abraham Lincoln said, “I will study and prepare myself, and someday my chance will come.” On earning not one, but two degrees this past August, Marian University Marian's Adult Programs. (MAP) graduate Eliot Forrest exemplifies that sentiment. Eliot studied, learned, and prepared. And now an amazing opportunity has come his way.

Shortly before finishing his degrees, Eliot met his employer’s new president. During their conversation, Eliot mentioned he would soon earn dual degrees, a Bachelor of Business Administration and a Bachelor of Health and Human Services. And to quote Eliot, “Her eyes lit up.” Not long after their conversation, Eliot learned that he had been selected to participate in a company-wide leadership program, sponsored by none other than the new president of the company.

Currently he works as a Solutions Engineer, Senior Advisor leading a team of application web developers. Eliot is certain that earning dual degrees, coupled with his technology experience, paved the way for his selection in the leadership program. Through the program, he’ll gain exposure to senior leadership, and be assigned an executive mentor who will guide his leadership project and champion his development for a future junior executive role.

Eliot is also a strong believer in community service, and looks forward to using his talents to improve society as a whole. In fact, his philosophy has served him well during his years of volunteering with homeless youth. Above all and most proudly, he instilled his life’s philosophy in his five children, ages 27, 25, 18, 16, and 13.

His gratitude at having the opportunity to earn dual degrees has turned toward the excitement of opportunities which lie ahead. Is Eliot finished dreaming? “Never!” He’s scheduled to begin graduate school in January. He also will complete the leadership program with his employer, perhaps rising to a divisional vice president or maybe teaching at the collegiate level.

Eliot thought he knew who he was from a young age, but now HE KNOWS who he is. And he continues to become who he is meant to be... the person who dreams big, achieves much, and gives back to the world. Does education pay off? Eliot emphatically says, “Indeed it does.”