Birding is great in the Nina Mason Pulliam EcoLab! Over 165 species of birds have been found in the NMP Ecolab since 2002. Not bad for a small property located in the midst of an urban area. 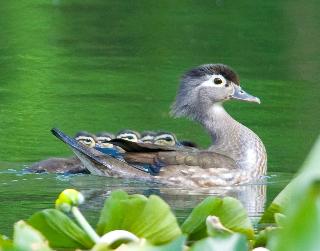 A Birder’s Guide to the Nina Mason Pulliam EcoLab

As you walk the South Shore Trail, watch for Song Sparrow and (in winter) Juncos and Brown Creeper. Wood Duck, Belted Kingfisher, and Great Blue Heron are often seen on the pond. Hooded Mergansers are a little more rare. A heron or kingfisher may even be seen in winter, since the springs flowing from the hillside maintain some open water during the coldest weather. Phoebes nest annually in one of the stone structures along this trail. Great Crested Flycatchers and Pewees also nest in the NMP EcoLab. As many as three Winter Wrens have also spent the winter on the property. Listen for them in wet areas with logs or brush cover. During migration and in some winters, Yellow-bellied Sapsuckers are seen from the paths around the pond. The trails along the shore are also good observation points for beaver in early morning or evening.

Along the north shore of the pond are several dead trees. Downy and Hairy Woodpeckers can often be seen here. Red-headed Woodpeckers, nesting nearby, can also be found. A small prairie area along the north shore provides cover and food for flocks of wintering sparrows, including Song, Field, American Tree, and Swamp Sparrows. White-throated Sparrows can be found in several places in the EcoLab from fall through spring. Fox Sparrows and White-crowned Sparrows are harder to find, but regular visitors. The NMP bluebird boxes in the prairie are used by Tree Swallows. Bluebirds are seen throughout the year in the NMP EcoLab. As you turn north to take the path which parallels Crooked Creek, you pass a large cottonwood in which Great Horned Owls have nested several years (late winter to early spring). When the owls are finished, a pair of Canada Geese often takes over the site.

Turning back to the west you will pass a fence lined with shrubs. This is a good area for wintering sparrows and migrating warblers. Nesting warblers often heard here include Yellow, Yellow-throated, and Parula. Common Yellowthroats nest in several places in the NMP EcoLab. The tall sycamores in the area of this fence line are used by the Yellow-throated Warblers and Baltimore Orioles for nest-sites. Orchard Orioles also sometimes nest nearby, giving one a chance to compare the two orioles.

The open area of the playing fields is used for the courtship display of American Woodcock in late winter/early spring. Woodcock are sometimes surprised in other parts of the EcoLab, but are so secretive and well camouflaged that they rarely make themselves visible.

Continuing west along the trail that borders the north beaver pond and marsh, look and listen for Rusty Blackbirds and Northern Waterthrush and Lincoln’s Sparrows during migration. All three of these species are regular migrants in the NMP EcoLab. In winter, the sycamores here furnish food for American Goldfinch and, in some years, Pine Siskins.

As you go north along the West Barkchip Trail, pause at the area around the little stone bridge. Hermit Thrush is sometimes in this area. This is also a good spot to observe a flock of migrating warblers. A little further on, look out over the beaver pond and marsh. Gadwall and Teal have been found here during migration. Both Red-tailed and Red-shouldered Hawks hunt in this area. The boardwalk is a good place to find wintering Swamp Sparrows. The seeds of ash trees here draw Purple Finches in some winters.

Red-eyed Vireos and Wood Thrushes nest in the woods at the north end of the NMP EcoLab. In the spring and fall, other vireos and warblers of all the Eastern species might be here.

Returning by the East Barkchip and Rustic Trails, there are several small clearings offering more opportunities to spot migrants and residents. But don’t forget to look up occasionally. Almost anything might fly overhead. Birders have been surprised by such species as Merlin, Longspurs, and Pipits.

A bird walk in the NMP EcoLab can continue to produce results even on the return to the parking lots. Cooper’s Hawks have nested in the trees near the Allison Mansion. Red-breasted Nuthatches sometimes utilize the conifers here and near the Convent. In the spring, one of the nesting Chipping Sparrows or Carolina Wrens may greet you with his song.