Several types of wetland exist in the EcoLab, including marsh, forested wetland, sedge meadow, open wetland, and fen. A large cattail marsh exists on the southwest corner of the property west and northwest of the main pond. Another small cattail marsh exists on the east side of the forested wetland east of the rustic trail. There is a section of forested wetland between the cattail marsh and baseball field (bisected by the Bark Chip Trail) and around the beaver pond. A small area of sedge meadow can be found north of the cattail marsh. An area of open wetland occurs on the north-central section of the property north of the maintenance road. A fen is located along the south bluff at the southwestern edge of Marian University pond between the bluff and the trail. 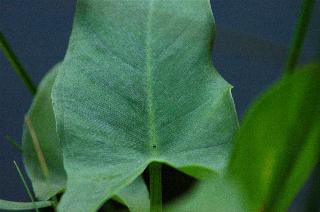 Man-made structures of note in the wetland areas of the EcoLab include two spring fed stone pools, a spring house, and cisterns located on the south border of the EcoLab at the east end of a small fen bordered by the South Shore Trail on its north side (between Marian University Pond and wooded bluff) and another stone pool located on the northwest corner of a cattail marsh near the far western edge of the EcoLab. These structures were all built as part of the original landscape designed by Jensen. More recently built structures include walking trails and a service road which runs east/west between the beaver pond and cattail marsh.

Most of the wetland sits on Sloan silt loam consisting mainly of sandy clay loam, but there is also an area of silty clay loam along the southeast side of part of the cattail marsh just off of the Bark Chip Trail and an area of clay in the fen located along the southwest end of Marian University pond. The Ecolab lies along the Crooked Creek and White River floodplain and is subject to flooding most of the year. The area is very flat, drains poorly, and has a high water capacity (Strum and Gilbert 1979). According to a previous survey, water levels in the wetland areas remain within two decimeters of the surface during periods of dryness (Tungesvick, 2003). The soils of this area should contain of a high content organic matter (Tungesvick, 2003). pH ranges from 7.6 to 8.6.

Most of the wetland and marsh areas (including the main pond) appear to be primarily groundwater fed. Several areas of groundwater seepage occur all along the south bluff below the campus. The beaver pond north of the maintenance road appears to be fed to some degree by a small creek on the western border of the property called Hatchery Creek, the source of which is runoff from a nearby housing development. There are two or three inlets where water flows into Hatchery Creek on western border of the property. Water entering the EcoLab flows to the east and eventually drains into Crooked Creek. The area is subject to flooding from Crooked Creek during most of the year and from melting snow. In the forested wetland and cattail marsh areas, the water level can drop below the soil surface for part of the year during dry periods.

Most of the wetland areas receive full to partial sun (more than six hours per day). There are areas of moderate shade along the eastern bluff, east of the beaver pond and to the east of the Rustic Trail, which bisects a cattail marsh and forested wetland; these are small densely wooded pockets which likely receive less than six hours of sunlight per day. Most of the area around the beaver pond and the marsh/forested wetland area previously mentioned receive partial sun. Areas of direct sunlight include Marian University pond, the beaver pond, and the cattail marsh adjacent to the western bluff. There is a small cattail marsh east of the Rustic Trail which receives full sun.

Ground water seeps at the base of the bluff keep the soil saturated here year round. The fen contains mostly shrubs, wildflowers, and perennials including, but not limited to, several sedges (Carex granularis, hystericina, laevivaginata, suberecta, vulpinoidea), fowl manna grass, moneywort (Lysimachia nummularia), swamp milkweed, fringed loosestrife (Lysimachia ciliata), blue flag iris, joe-pye weed, swamp buttercup, goldenrod (Solidago) and an abundance of non-native watercress (Rorippa nasturtium-aquaticum). There also appears to be quite a bit of non-native privet in the fen as well.