The EcoLab contains a great variety of plants, both native (from Indiana; 260+ species) and non-native (60+ species). This great diversity is the result of several events that have impacted the landscape: geology, presettlement history, the Jensen design, and contemporary restoration efforts. 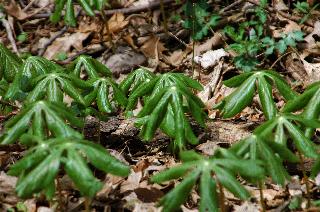 Central Indiana is part of the Tipton till plain, distinguished by bedrock covered by a very thick layer of glacial till from the relatively recent (12,000 years ago) Wisconsonian ice sheet (Camp and Richardson 1999). As glacial meltwater poured down the White River drainage, including Crooked Creek, its meandering carved the floodplain and escarpment that characterize the EcoLab’s topography – the bluff and lowland forest. This prehistoric glacial activity contributed to the establishment of the four distinct habitat types found in the EcoLab today:

Presettlement History and the Jensen Design

Much of this vast forest, including the property that is now the EcoLab, was converted to agriculture early in the 19th Century. A large portion of the EcoLab was purchased in 1910 by Indianapolis 500 founder James A. Allison to build his summer estate, “Riverdale.” Allison commissioned the landscape architect, Jens Jensen, known for his use of native plants in “natural” groupings, to design the landscape. Jensen designed five man-made lakes, a large meadow, several wetland areas and spring-fed water features, and various structures such as cobblestone bridges, two sets of limestone steps, and a colonnade for Riverdale, completed in 1914 (Roth 2003). The Jensen landscape was maintained by Allison until his death in 1928.

In 1937, the Sisters of St. Francis of Oldenburg, Indiana acquired the Allison Estate and established Marian University in Indianapolis. By 1949, the college consisted of classrooms, administrative offices, a chapel, assembly rooms, and a library. The area now called the “EcoLab” had begun to be used for educational purposes for the students.

Rehabilitation work began in the spring of 2000, led by Dr. David Benson. Honeysuckle that covered about 85 percent of the understory area was removed as well as other non-natives such as bittersweet and buckthorn, followed by several large planting projects. Over 4,000 cubic yards of fill were excavated to restore the Jensen designed roads to their original alignment. The EcoLab now has over 1.5 miles of trail in its 55 acres and environmental restoration is continuing.